A Data Visualization Project presenting Richard's Wagner opera - 'The ring of the Nibelungen'. The opera is a cycle of four German-language epic music by Richard Wagner.

In this project, I analyzed the operas and presented them in two posters, a printed vinyl package, and a website of feelings.
‍
I wanted to create a unique perspective to the opera, using the antique warm colors, yet to present it in a simple way, so we can understand more about its history, characters, and atmosphere.

The ring of the Nibelungen 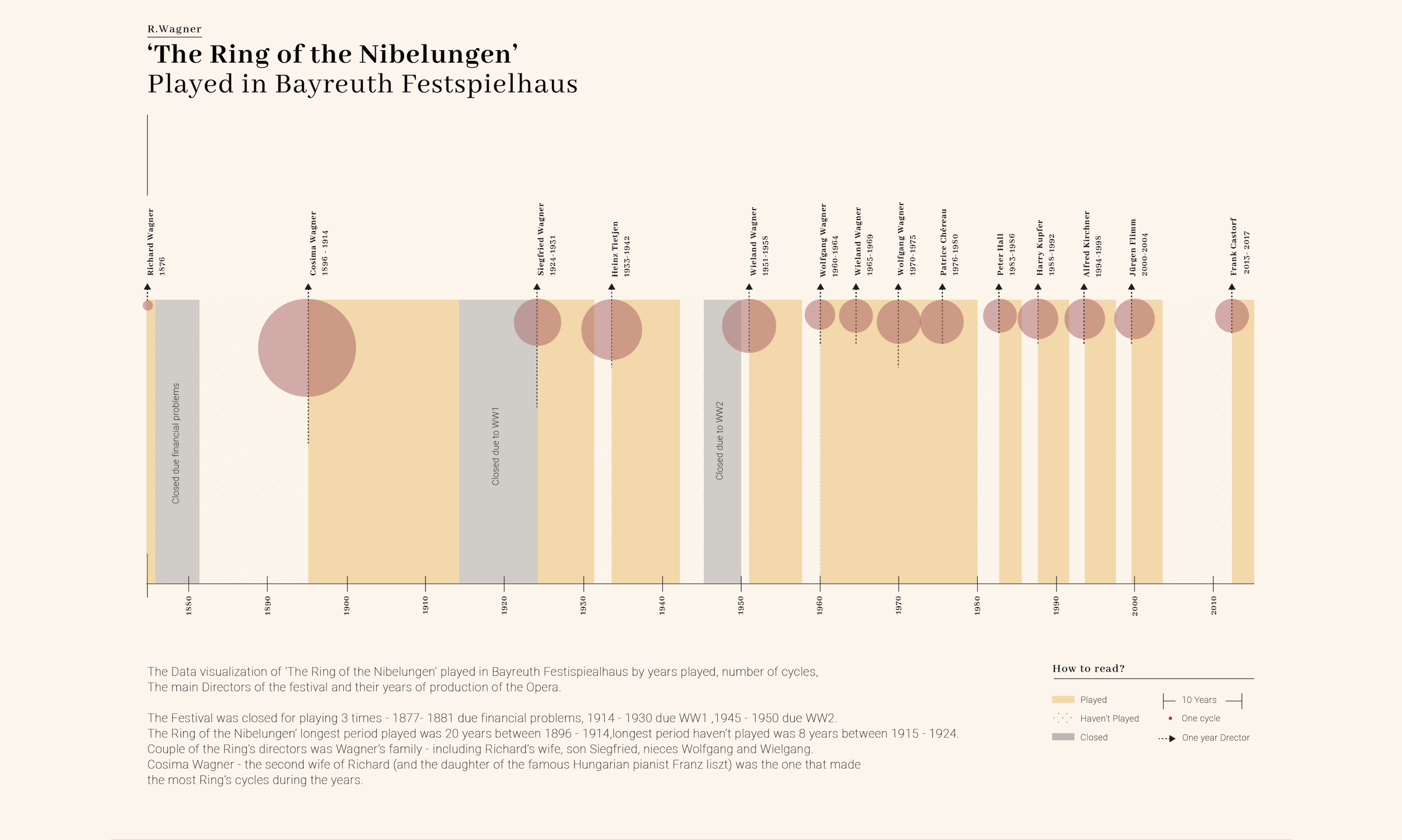 The purpose of art: to make the unconscious conscious.

How do you visualize an opera trough data? trough feeling? trough the relationships between different characters and acts?
It is such a depth experience and not only a visualization of the narrative and music.
Why Opera?
I stumbled on Wikipedia upon a place called Festispielhaus in Bayreuth, Germany. An Opera house built by and for Richard Wagner, so he can play his own Operas, and mostly, to present the new Opera he was working on a several years— ‘The Ring of the Nibelungen’ — at this preciously moment I knew that this is a place I should explore (well, not physically unfortunately). It was quite strange to me that an opera house built entirely to serve the play of one opera, and since I am generally intrigued by German's mixed and wast history and culture, I decide to explore it in w data-visualization project.
Research
‘The Ring of the Nibelungen’ is a cycle of 4 epic music dramas which are based loosely on characters from the Norse sagas and the Nibelungenlied.

The cycle structured in three days preceded by a preliminary evening (Full cycle — four days in general.) The four music dramas are: Das Rheingold (The Rhinegold) Die Walküre (The Valkyrie) Siegfried, Götterdämmerung (Twilight of the Gods).
‍
I started to explore the web, books and every other media I could gather (including buying the vinyls), collecting the information in google sheets, defining and analyzing it. Even bought the 4 vinyls. 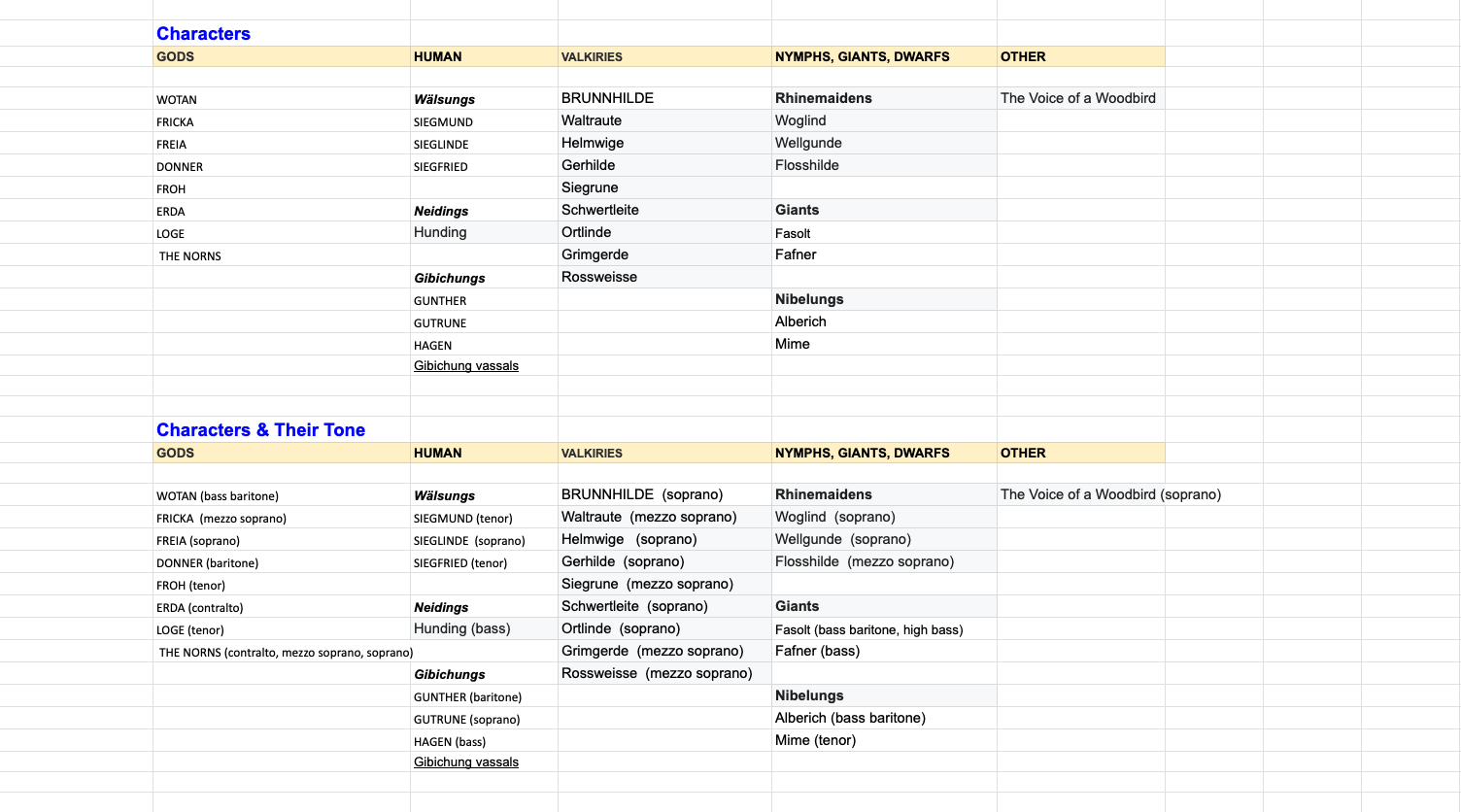 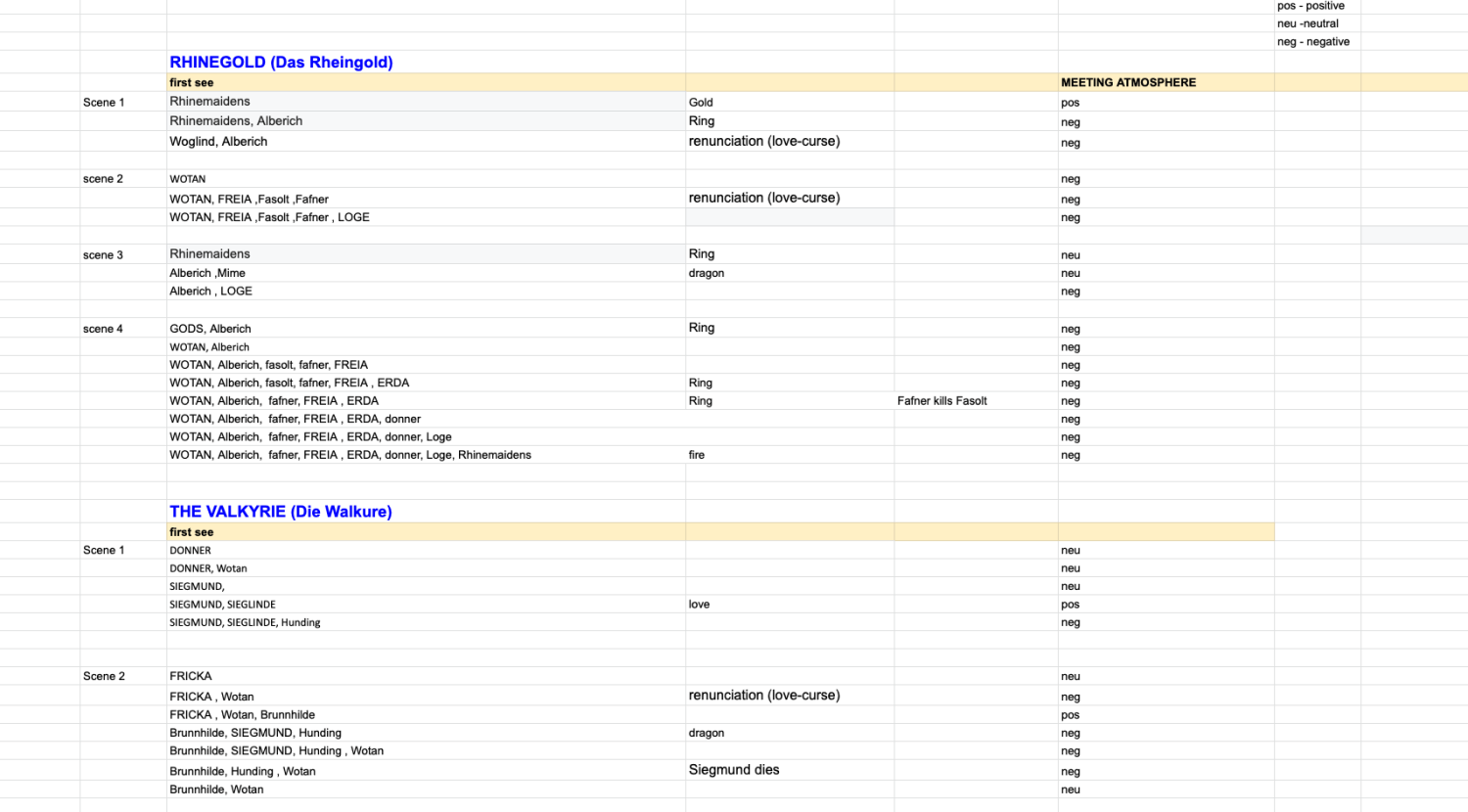 How does it feels?
One of the many things I’ve found was a written play (well… it’s not just music, but an Opera) of the cycle ‘The Ring of the Nibelungen’. I started to read it (In English translation, the play itself is in German) and I felt like this is more of a tragedy than a Drama play. All of the characters are killing each other for a gold ring (that’s where Tolkien got the Idea), gaining anger, having sad love stories…and I decided that I order to understand it, I need to see if it is really the way it feels — a Tragedy, or is there any ‘good vibes’ there?
‍
I started to define the meetings between the characters in three different atmosphere feelings: Positive, Neutral and Negative.
‍
I decided to do a circle which will present the play, some sort of base for the meetings, and to connect lines between the characters  —using the color of the feeling, which will present the meeting.
‍
I could learn that the first ‘The Rhinegold’ and the last one ‘Twilight of the Gods’ both are really Negative, while ‘Siegfried’ was the most Positive, and ‘The Valkyrie’ is the most Neutral. 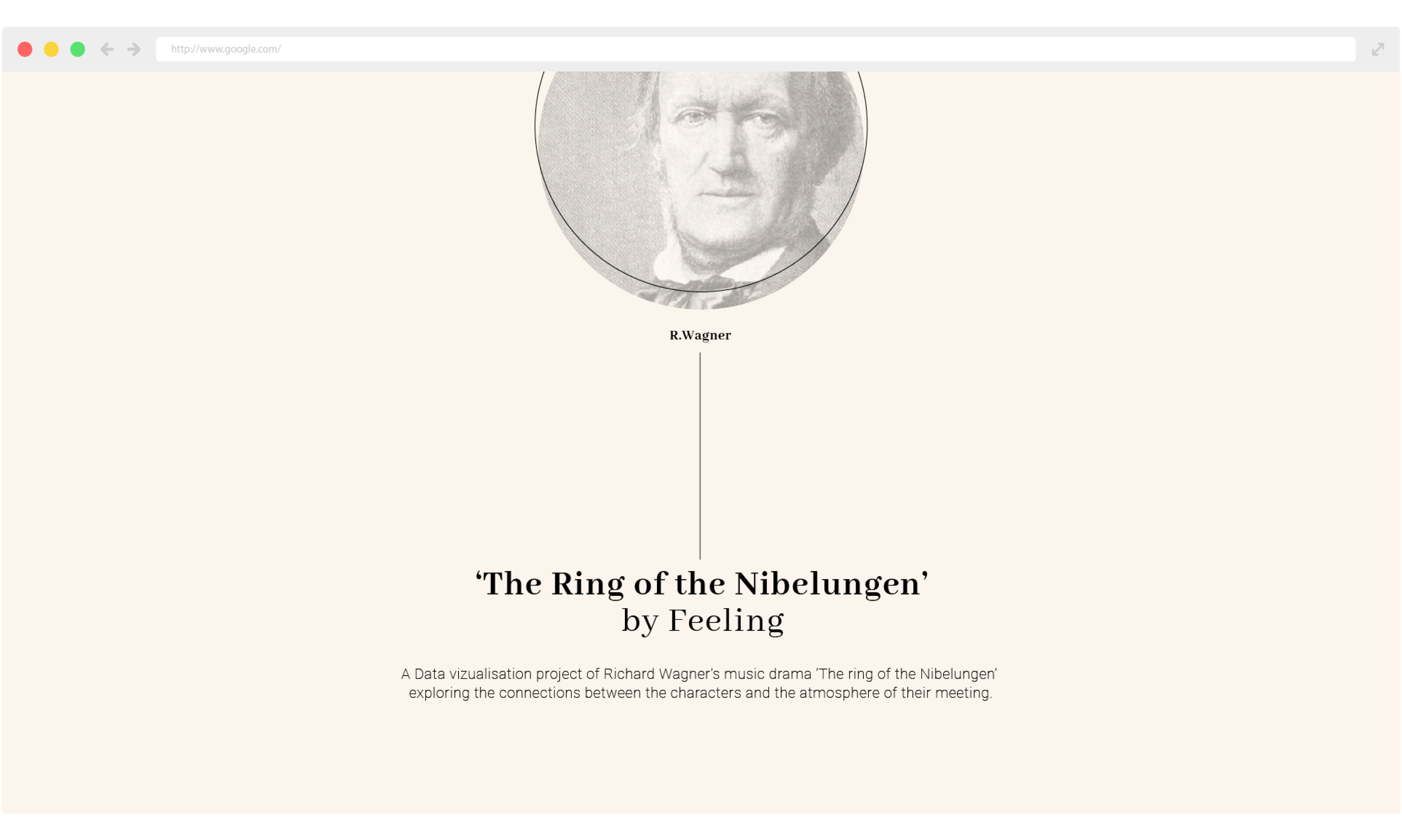 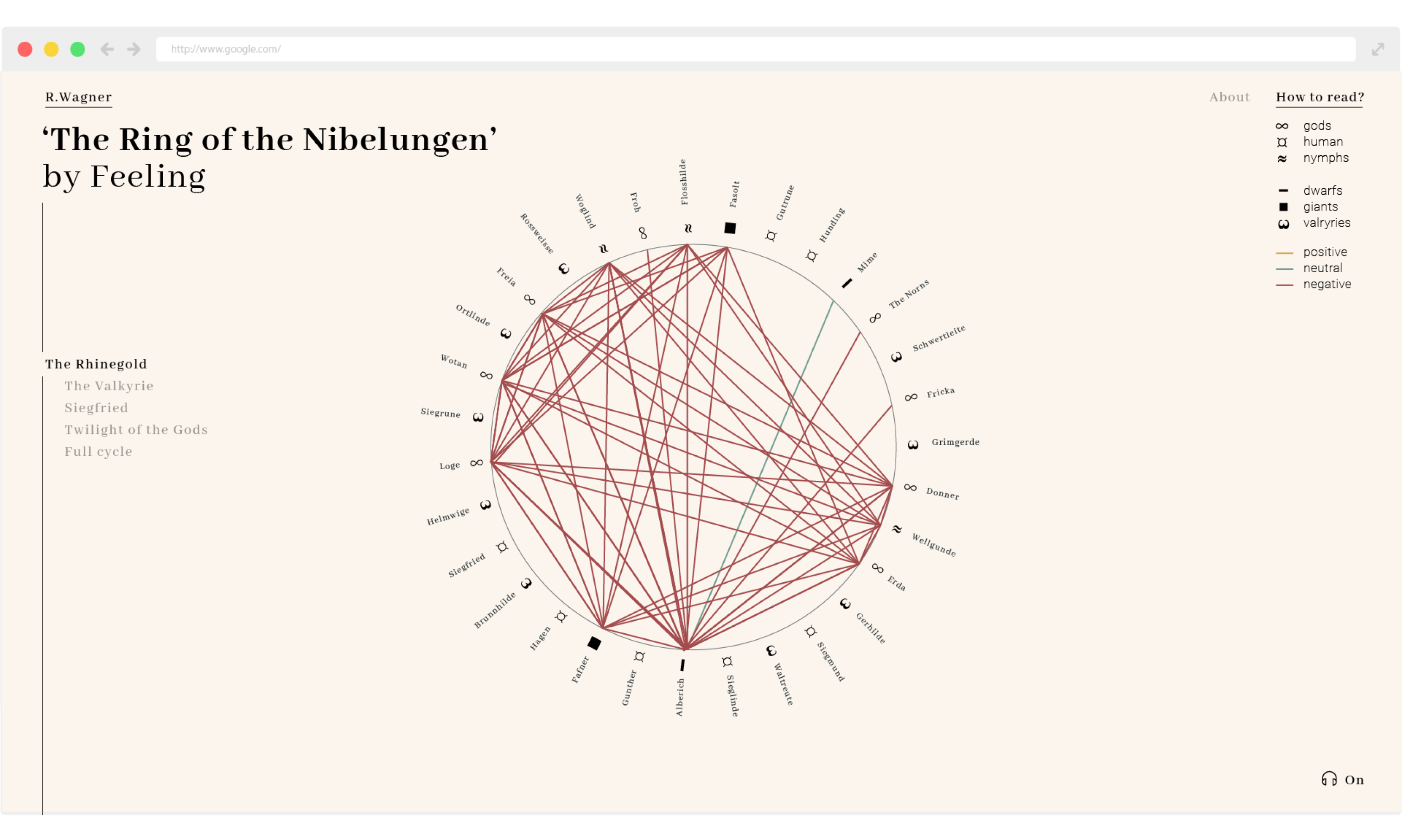 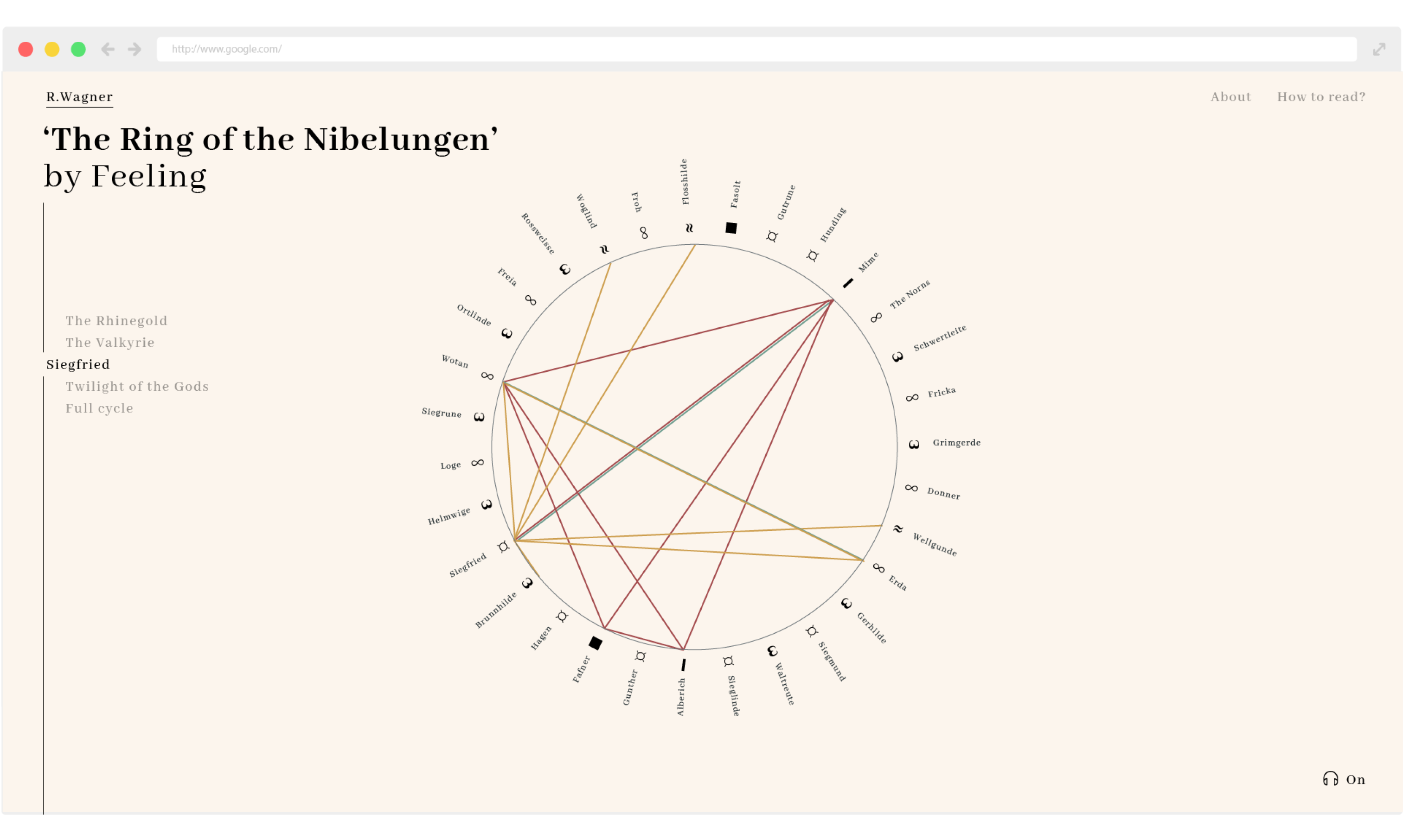 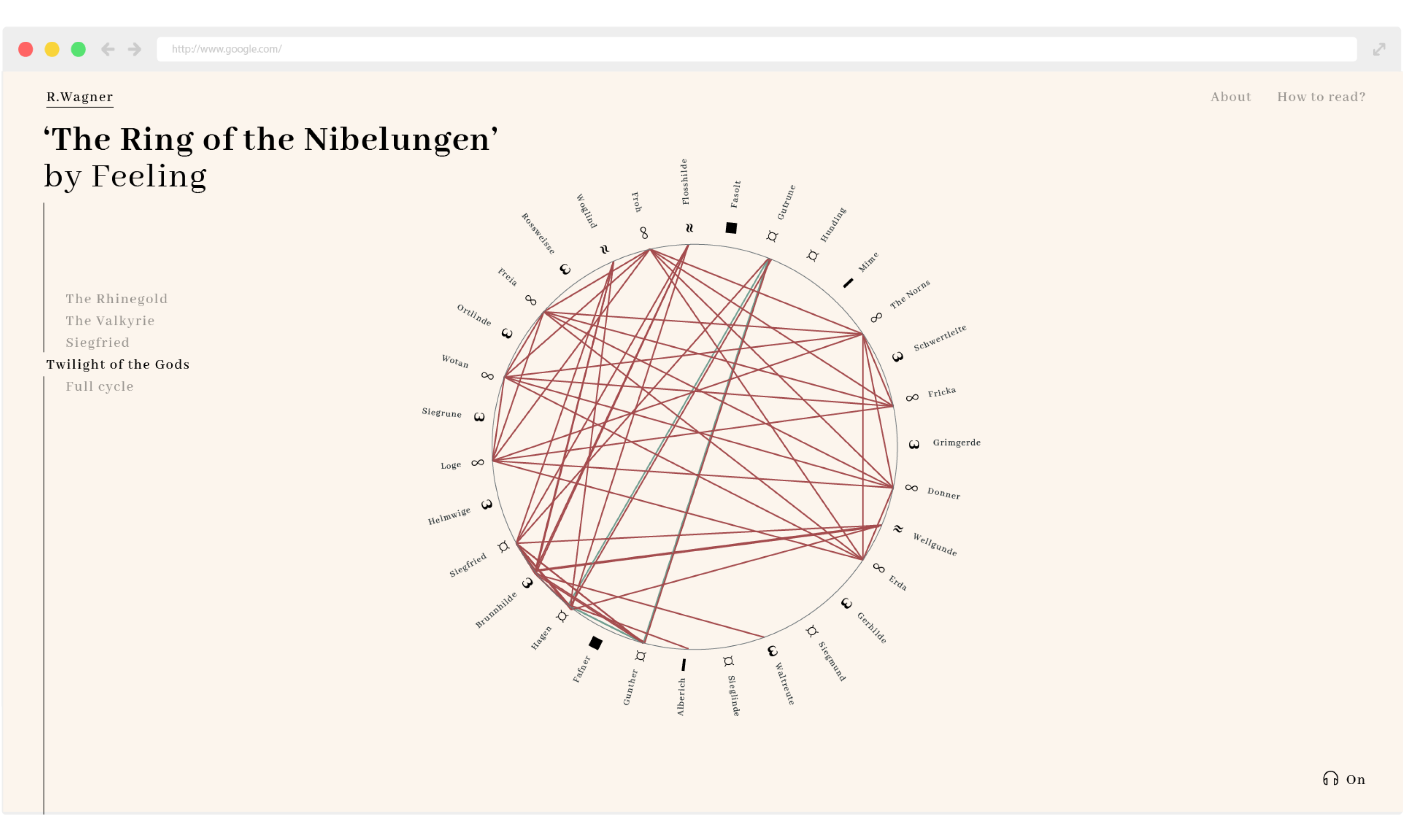 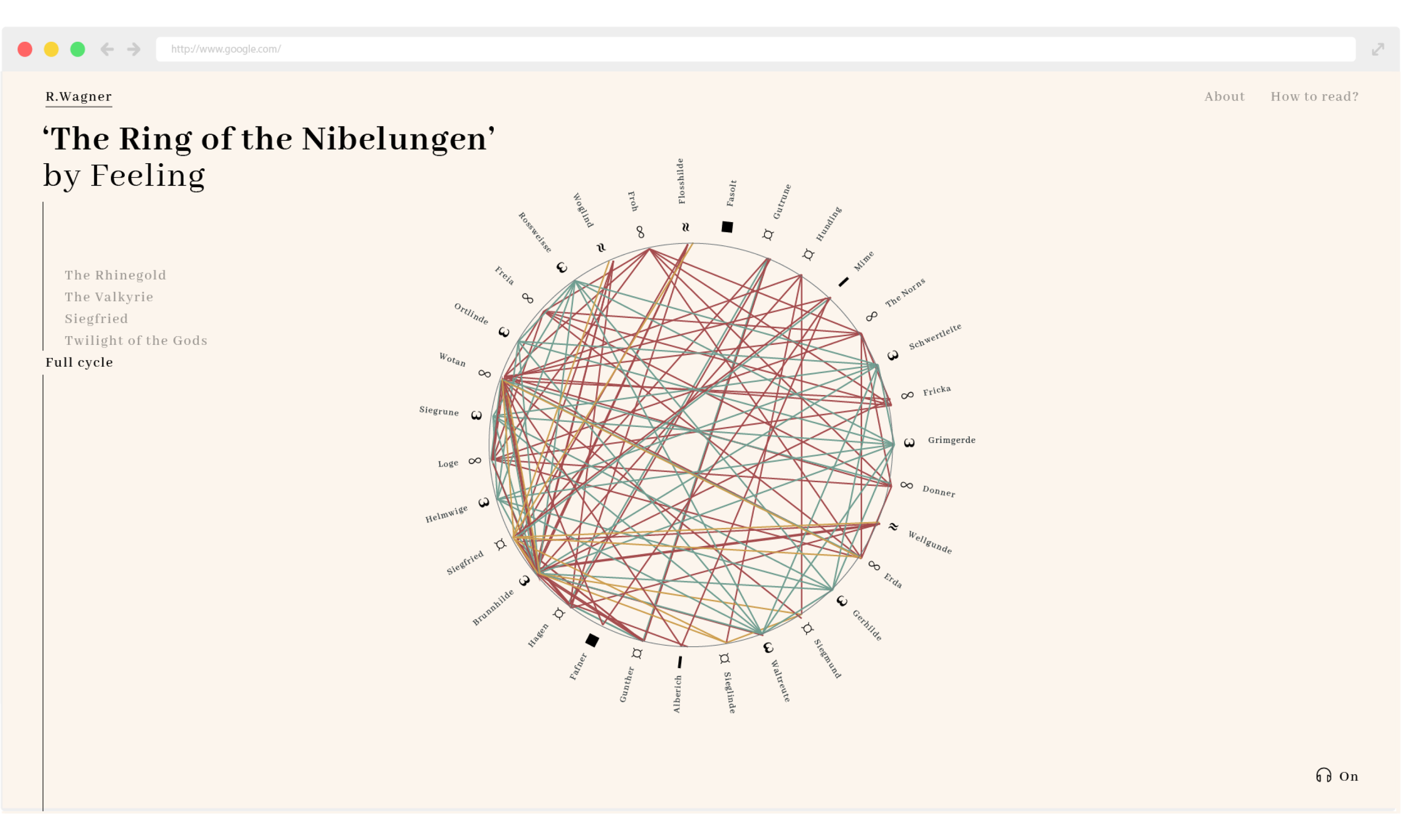 Genealogy
It is really hard to understand the connection between the characters, since there are so many different ‘kinds’ of them (Nymphs, Gods, Humans, Dwarfs, etc) all of them have different connection (siblings, love affair, and so..) and sometimes you cannot really understand from their names whether it’s a female or a male (‘Gunther’ for example).Since I’m a Genealogy fan (spending all of my day in My Heritage website :)),I found a couple of sources about their complicated family tree, and I wanted to create the most simple diagram that I can, in order to understand it. 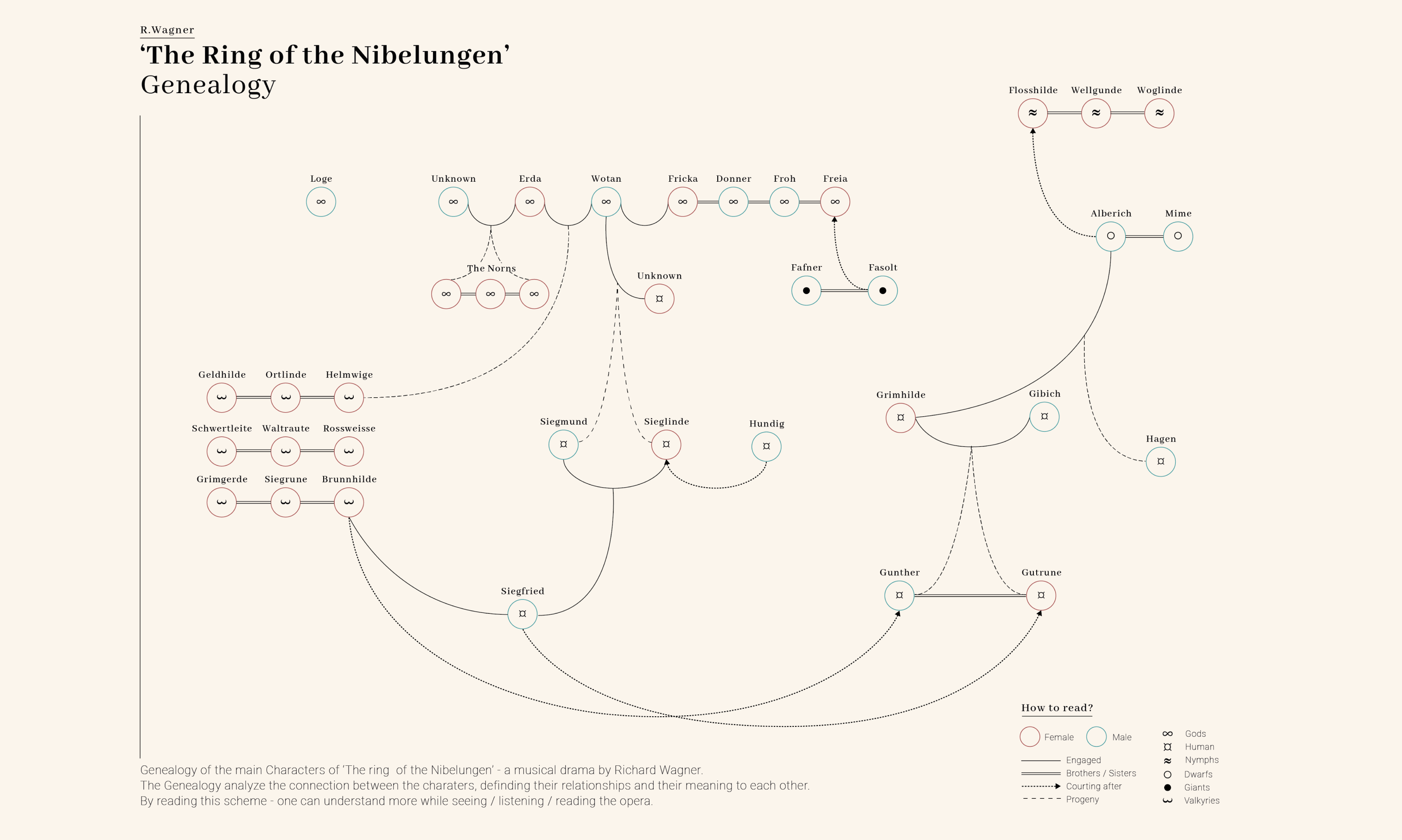 The Location, of course!
Wagner had so many Operas, but at first he opened the Festispielhouse (the Opera House) in Bayreuth just for the premier of ‘The Ring of the Nibelungen’, and I really wanted to see how many times it was played there.
As I gathered the information from their Official website and other different Fan websites and news articles, I understood how important the play is, it became a part of the German people.
During the years the ‘The Ring of the Nibelungen’ , solely at the Festispielhaus Bayreuth, played more then 85 cycles ( A reminding: 1 cycle = 4 days), while the longest period of the years played was 21 years. Also I wanted to see which Directors was in charge of the plays, how many years they were on stage, how many cycles they did.
As you can see, many of the Wagner’s family members were also the Directors of the Opera.

A printed vinyl
As the cycle includes 4 music dramas, and several Acts, I really wanted to use this information to relate to something physical, and what is better than to present this information on a Vinyl?I had this Idea that I must repeat the symbolism of the cycle and to use a circle to visualize it. After trying the simple boring pie charts and some other things, I understood that I need to relate to the Vinyl concept, a round record that starting to play from the outside to the inside (those who have phonograph would know what I’m talking about). So I decided to visualize it as it is — from the outside to the inside, imagining as it’s playing and going round and round, going by it’s genuine music timeline (‘The Rhinegold’ first, ‘The Valkyries’ second.. etc)I defined the Acts by colors, and decided that every small string will present 2 minutes of playing. 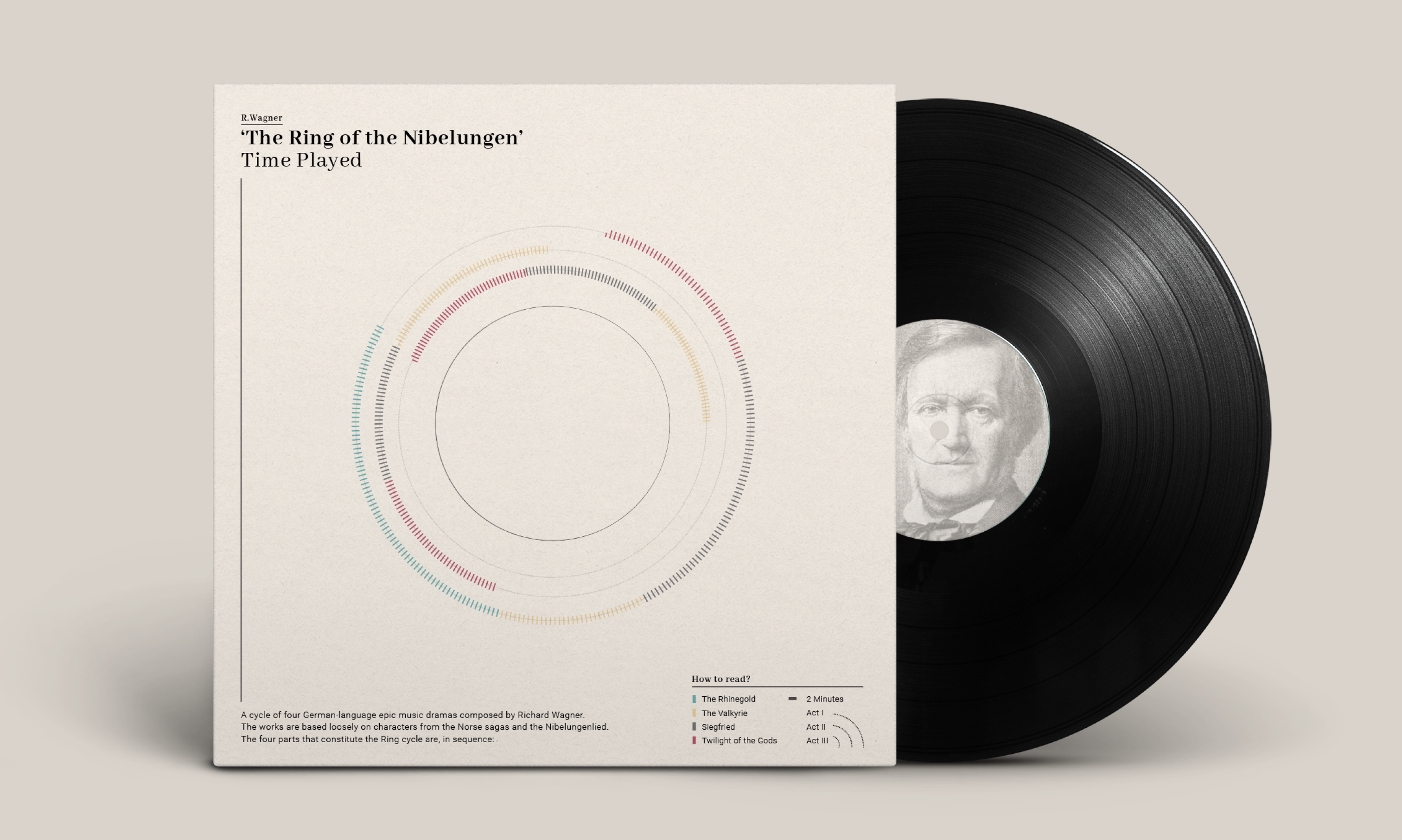 IsVis conference 2018 talk (Hebrew)
I was invited to present The ring of the Nibelungen at IsVis, an Israeli data-visualization conference.